Most startups have not taken the advice Geoffrey Moore enlightened us within “Crossing the Chasm.”

Startups we have worked with are still ‘a solution looking for a problem.’ As Moore’s technology adoption graphic depicts, only 16% of the people who look at a new product will want to buy it (Innovators + Early Adopters). 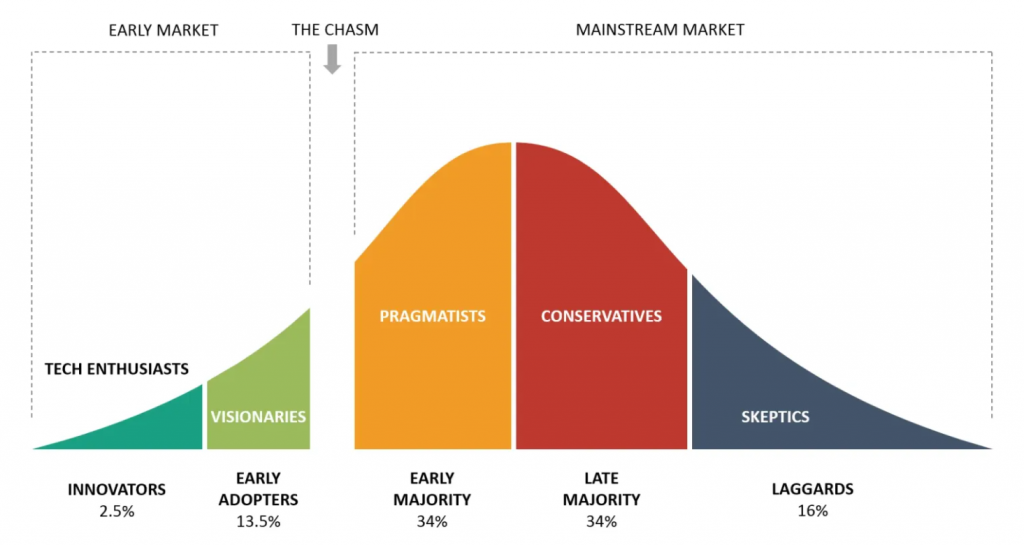 Innovators and Early Adopters see the vision and understand the value even better than the startups who are trying to sell it to them. This is why they buy.

16% doesn’t create a sustainable successful business. Most startups, as Geoffrey Moore points out, fail by falling into the “Chasm”. In fact, 90% of the startups will fail!

Even the ones who start quickly still fall into the Chasm. Why? Because once the Innovators and Early Adopters have purchased, they run out of customers to sell to. The next group, the Early Majority, do not clearly see the vision of what problems, opportunities, and measurable value would result from buying the new solution.

They fail because they can’t articulate their value or prove it through actual customer success with metrics, quotes, and story-based proof that the Early Majority can understand.

How do you find more customers, who look like your best customers?

You find more customers who look like your best customers by attaching the Early Majority with materials they can relate to – Voice of the Customer Stories.

In 2008 a company called Vivisimo was stuck in the Chasm. You might not know Vivisimo, but you are familiar with where Vivisimo lives today. Today, Vivisimo technology is one of the core elements of IBM’s Watson.

Vivisimo was a privately held technology company in Pittsburgh, Pennsylvania, specializing in the development of computer search engine-based applications. The company was acquired by IBM in May 2012 and is now branded as IBM Watson Explorer, a product of the IBM Watson Group.

In 2008, while Vivisimo was stuck in the Chasm. Other competitors were beginning to thrive. Autonomy, a competitor, had achieved sales success, reached $100m in annual revenues, and was purchased by HP for $11.1b. Microsoft acquired another Vivisimo competitor, the Norwegian enterprise search company Fast Search & Transfer in 2008, for $1.191 billion. And Endeca, was already thriving and was eventually purchased by Oracle for $1.1b.

Vivisimo had sold some impressive customers. Including Airbus, Pfizer, T Rowe Price, Fidelity, P&G, John Hopkins University, Cisco, the US Airforce and the US National Library of Medicine, and many other notables.

Still, outside of the world of search-based software applications, no one knew who Vivisimo was.

Vivisimo realized they had no clue how their customers were using their software to improve their business operations and create measurable value.

Vivisimo hired a value-based expert team to conduct voice of the customer (VOC) analysis within their customer base to create relatable customer stories. The firm was hired to ‘harvest’ stories from the Vivisimo customer base. The VOC Story would include the critical business issues addressed, opportunities created, metrics-based results. It would also be corroborated by full rich customer quotes.

Each was documented and chronicled in 6-10 pages of detail. This way sales, marketing, business development, product marketing, R&D, and the management team would understand the business problems solved and value created, in the voice of the customer.

We sat down with two to three key customers in each of their verticals. This included healthcare, technology, government, life sciences, finance asset management, and manufacturing. We did this to understand who and why they originally sought out a solution like Vivisimo. Then, we determined who needed to sign the capital appropriation request to get the project approved.

What business issues existed that lead to purchase. What problems were solved, opportunities created, and how much value resulted. The results of the interviews were categorized into profit from revenue, cost optimization benefits, and productivity improvements.

When the 6-10 page version was done, another version of the full document was created. A two-page presentation worth version was created to be used by marketing and business development for lead generation. Also, by sales in presentations, to open doors and to accelerate deal closure. And finally, the aggregated information from all the VOCs was used to create value-based auto-generated sales materials and a business case that predicted for the next prospect, what was possible based on real-world customer success.

Each customer described how they performed the tasks before they purchased Vivisimo. They described the pain, missed opportunities, and inability to alleviate that pain. The passion for the Vivisimo solution flowed from these conversations.

The old way versus the new way allowed us to create day-in-the-life examples before and after Vivisimo. One client even called it BV and AV, Before Vivisimo and After Vivisimo because the difference was that dramatic. Quite clever – don’t you think?

Voice of the Customer- Not Salesperson

Prior to the voice of the customer stories the marketing model and sale messaging were dominated by technical talk about search-engine capabilities. It was messaging that no one outside of the world of search could understand. As a result, sellers were relegated to the type of individuals that they sound like – lower-level technology employees. Sales targets were missed and Vivisimo remained in the chasm.

After the VOCs the conversation changed to: “we helped Airbus see into their supply chain, including the supply chain of their suppliers, to find critical parts to get an airplane back in the air. The VOC revealed before Vivisimo, that for every airplane Airbus put into the air, 9 engineers were hired to support and keep the airplane flying.

After the purchase of Vivisimo, no new engineers needed to be added as new planes were delivered to customers. The annual savings were $38m. In fact, Airbus saved $1m per year in paper savings alone, adding to the convincing believability of the multiple stories and metrics supporting the annualized $38m in savings.

Please watch this Video of Kevin Calderwood explaining how these stories transformed Vivisimo.

Early majority customers, and even some who you might classify as Late Majority, purchased Vivisimo. And average Vivisimo ASP improved from $190k before using the VOCs, to over $800k in 39 months.

The rest of the story? Vivisimo was purchased for more than twenty times revenue by IBM.

Who creates the technical messaging that cause companies to end up in the Chasm?

Engineering and/or product marketing produce the go-to-market messaging used by most technology companies.  But they don’t consider why the customer bought.  They don’t think about who and how many executives had to sign off on the capital appropriation request before purchase. They don’t understand the customer’s journey. And they are unable to quantify the value that was created.

Vivisimo originally sold Airbus an enterprise license for $800k. If they had been able to predict that they would create $38m in value per year, the enterprise license would have been higher, and more in line with the value produced.

Armed with strong VOCs Vivisimo was able to show John Deere and many others how they could create MILLIONS of dollars worth of value. John Deere purchased a  Vivisimo solution for over $3m.

Technology companies are still falling into the Chasm

Sadly, even in 2022, startups and particularly tech companies are still talking about their product’s technical capabilities and falling straight into the Chasm which Geoffrey wrote about more than 30 years ago!

How VOCs and this approach impact Marketing and Sales:

Both Sales and Marketing help people buy our product. Both roles desire to initiate buy cycles versus sales cycles.

The first step in getting sales and marketing on the same page is to understand the profile of the perfect customer. The VOC stories help to define the perfect customer profile and the personas of the individuals involved in the buy cycle. The resulting definition, which flows from the VOCs, is used to measure and score all prospects going forward.

Once this scoring process is put in place and verified by VOCs, both sales and marketing understand how customers achieved a goal or solve a problem. This makes it easier to integrate sales and marketing because the VOC stories help to break down the traditional silos that separate them.

VOC stories explain how peers are using the product in understandable language. There is very little or no technical jargon. As a result, it’s easier to align everyone to rally around creating value for the customer. Hiring, onboarding, and training new employees becomes easier and faster because new hires no longer need to learn the technical speak.

There are other benefits. On the low end, deal sizes for software companies increase 43%. As we saw with Vivisimo, their average deal size increases 421% over thirty-nine months. Pipeline close rates at the low-end increase by 102%. And sales cycles, at the low end, are 21% faster.

VOCs become the foundation of a value-based process that brings measurable predictable value. And of course, we have many more VOC-based stories, like Vivisimo, that back up our metrics.

Zebrafi produces, then leverages, Voice of the Customer Stories which teach sales and marketing leaders how to find prospects with pain points that their company has a track record of solving.

Sitting on top of Salesforce, Dynamics, or HubSpot, Zebrafi makes any existing B2B sales process more successful by leveraging groundbreaking software that scores and vets the perfect prospect throughout the buying journey.

Zebrafi’s guided selling software teaches sellers how to present value, speak the language of the customer, and build business materials supporting the purchase of their solution. www.zebrafi.com

And how to get out of the Chas 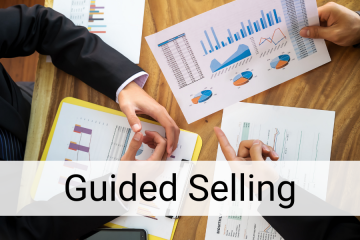 The Ultimate Guide to Guided Selling

This post is all about the beginning steps to guided selling and why it is crucial for your business to succeed.  Steven Spielberg is to movies as Guided Selling is to B2B Sales organizations: The Read more… 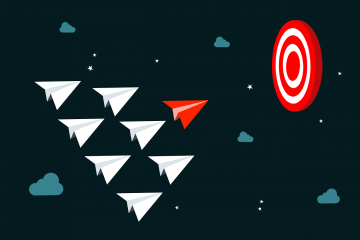 How do you find the decision-makers at your prospect’s company? It isn’t easy. Between the gatekeepers and the changing titles, it’s hard to determine who calls the shots, who has the power to decide, and Read more… 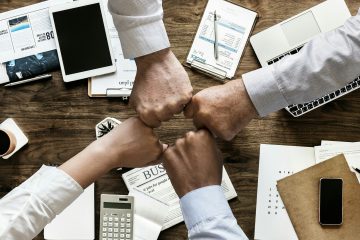 How To Realign Your Sales Team for Success

How do you feel about change? If you feel uncomfortable, you’re normal. Most of us don’t like change. But change you must. This is important to remain adaptable in a rapidly changing landscape. One that Read more…